Where to Find Aircraft & Operators
It’s common practice for manned aircraft solutions providers in the solar industry to use rented aircraft and contract pilots. Charter or inspection companies are a great way to find pilots and aircraft. Certified flight instructors (CFIs) at flight schools are also good resources. CFIs are already experienced in the aircraft and flight schools have posted rates for students and others who have “soloed” and are eligible to rent the aircraft. Charter companies, inspection companies and flight schools are located nationwide, so it’s only necessary to move people (such as the data capture specialist) and equipment (such as the FLIR camera). A directory of flight schools can be found on the FAA website.

Flight schools can also provide connections through flying clubs where members pool resources to share one or more aircraft. As solar PV system inspection is a commercial activity, ensure that the pilot holds a commercial certificate under FAA FAR Part 61. A directory of flying clubs can be found on the AOPA website. When renting an aircraft, ensure that you are asking for the “wet” rate, which includes all operating costs, including fuel. Aircraft rentals may require a minimum rental of 4-8 hours.

Airspace Research
Prior to adding a PV system waypoint, the airspace should have been thoroughly researched by the vendor or the vendor's pilot. This includes identifying military airspace, restricted airspace, special use airspace and controlled airspace checks and authorizations. On the day of the inspection, temporary flight restrictions (TFRs) must be checked again.

The pilot must also account for terrain considerations and weather. The data collection specialist is responsible for coordinating with the customer to ensure that the PV system is fully energized and is free from soiling or other physical obstructions that can affect the analysis. 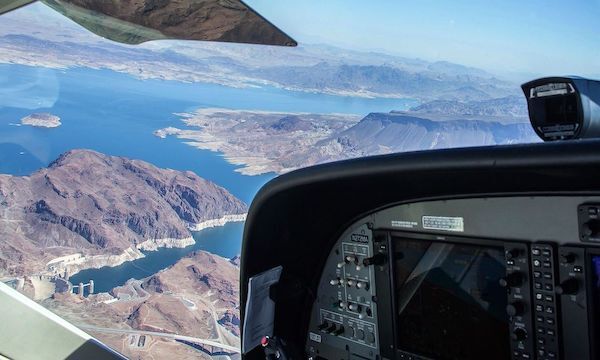 Flight Pattern Planning
In the northern hemisphere, fixed-tilt PV systems are angled towards the south (rows run east-west), while variable tilt PV systems (i.e., tilt tracker systems) follow the sun east to west (rows run north-south). The ideal flight pattern is along the rows, which means east-west passes for fixed-tilt and north-south passes for variable tilt. This is the same guidance as drone operations. For an unmodified aircraft or non-gimbaled setup, the camera is generally facing out the left or right window, so unless it it close to solar noon, the camera will be facing the rear of the panels and usable data cannot be collected on the return pass.

Minimum Altitudes
Above ground level or AGL refers to an aircraft’s altitude relative to the ground below. Mean Sea level or MSL refers to an aircraft’s altitude above the average sea level, which makes it a constant value no matter what kind of terrain is below. Drones and manned aircraft that are operating at low heights or landing will use AGL.

⚠️ For solar farm inspections, it is recommended to communicate altitude to the pilot in both AGL and MSL so you know exactly how high over the solar farm you are flying, which is a critical element of capturing good data.

Manned aircraft altimeters work off of pressure altitude which corrects for atmospheric conditions to maintain a given altitude. Small aircraft do not have radar altimeters that tell them how high they are above the ground. Because of this, the best way to ensure that the pilot flies at the correct altitude for each site is to:

⚠️ A manned, fixed-wing aircraft must maintain an altitude of at least 500 feet above ground level (AGL) when performing maneuvers (such as performing turns). Higher altitudes allow for a greater margin of safety. Below 500 feet AGL, an aerobatics license is required.

Land & Asset Owner Permission
Manned aircraft do not require landowner or asset owner permission to collect thermal or color imagery. Some vendors even choose to gather intelligence on competitor solar systems, with the goals of increasing sales and providing customers with data and intelligence.

Plane of Array Irradiance
The plane of array (POA) irradiance from on-site sensors should be used as the ground truth to confirm minimum irradiance levels during aerial inspection. Intermittent clouds may require a change in the flight plan because it’s not economical or environmentally-friendly for an aircraft to remain in a holding pattern. For overview level inspections, failure to verify irradiance means that a majority or all of the data may have been captured under substandard conditions. For IEC-compliant inspections, the increase in data capture time relative to overview inspections means that changing conditions are inevitable. When conducting a manned inspection, POA irradiance from a pyrometer may not be obtainable from the ground. Flights should be conducted on sunny days with no cloud cover and should not be conducted within two hours of sunrise or sunset. Humidity should also be less than 60%.